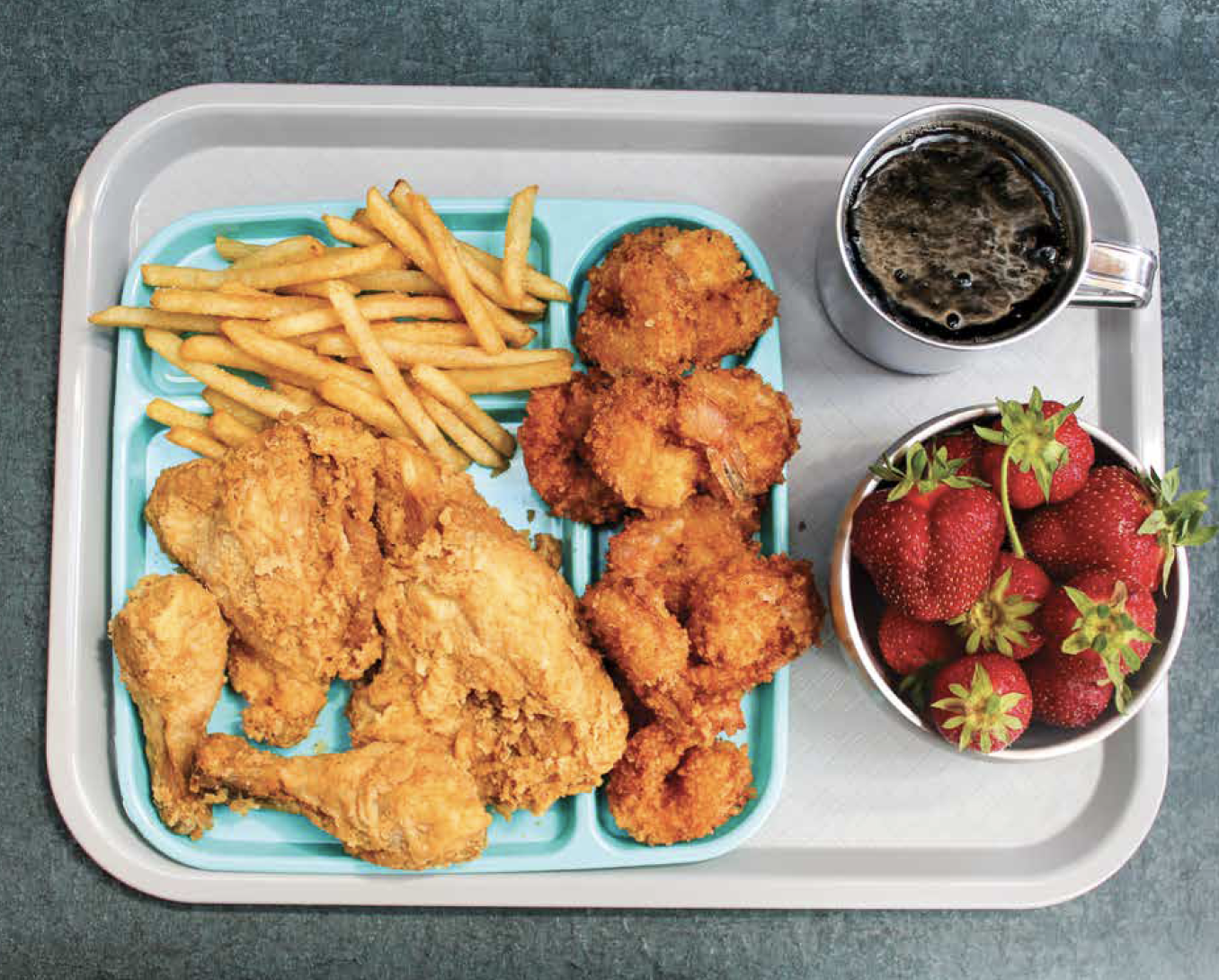 Want to know the secret ingredient to making your cocktail taste better? Mixing it with a popular We know why you’re here. The words “serial killer” caught your eye right away, and you couldn’t not click. You’re probably a true crime lover, a murderino, an armchair detective. And if you are, you’re in luck. Get ready for the next true crime media you never knew you needed: A cookbook! You’ll eat this up if you’ve ever wondered what Ted Bundy’s, Ruth Snyder’s, or John Wayne Gacy’s last meal was!

Some of you may be thinking, “Murder and food? Gross!” That’s okay. Fans of true crime know this subject isn’t for everybody. But that doesn’t stop us from getting our hands on every serial killer book, or true crime podcast, documentary, and TV show that we can. And now we can add a cookbook to this list. Author and fellow murderino Ashley Lecker’s new cookbook, The Serial Killer Cookbook: True Crime Trivia and Disturbingly Delicious Last Meals from Death Row’s Most Infamous Killers and Murderers, is designed to teach you as much about notorious serial killers and their crimes as how to cook delicious food. In this cookbook, you’ll find true crime trivia about criminals like John Wayne Gacy, Ted Bundy, Aileen Wuornos, Timothy McVeigh, and many more accompanied by recipes for the last meals these criminals requested on Death Row.

Lecker takes the best part of each last meal and adds her own home-cooked twist to make these dishes just what the title says: disturbingly delicious. Read on for a small taste of what’s inside The Serial Killer Cookbook with this recipe for infamous serial killer John Wayne Gacy’s (a.k.a. The Killer Clown) last meal, and a bit of trivia about his last words.

John Wayne Gacy was an American serial killer from Illinois, known for dressing up as a clown for special events, using the name “Patches” or “Pogo,” and came to be called “The Killer Clown.” Gacy grew up in an abusive household, but had a close relationship with his mother and sisters despite the violence from his alcoholic father.

As an adult, he managed KFC restaurants and maintained a family man appearance, but he was living a double life. Behind his upstanding citizen persona, Gacy had begun sexually assaulting boys, oftentimes paying them and giving them alcohol. Eventually he was charged and convicted of assault on a teenage boy, and served prison time. He argued his innocence throughout the whole process, and even paid a teenager to beat the victim to try to prevent him from testifying. Gacy served 18 months of his 10-year sentence. Gacy’s wife divorced him and his father died during his incarceration.

It is infuriating that Gacy violated his parole and was caught, but the Iowa Board of Parole never learned of the sexual assault charges, and records of his previous convictions in Iowa were sealed after his parole ended. Thanks to this oversight, Gacy (with his mother’s help) was able to purchase a home on Summerdale Avenue in Norwood Park Township, Illinois, an unincorporated part of Cook County, where he lived until his final arrest.

Gacy remarried and started his own construction business. He also became active in the community and in fundraising efforts for various organizations, donning his clown costume at many events. But Gacy’s actions behind the scenes were escalating. Not only was he assaulting boys and young men, he had also begun to kill. Gacy called the period of time between 1976 and 1978 his “cruising years,” when most of his murders were committed. During this time he “buried” his victims in a crawl space under his house that was mainly beneath the dining room and Gacy’s bedroom. Toward the end, he began putting his victims in the Des Plaines River.

Robert Jerome Piest was Gacy’s final victim. Piest was a 15-year-old pharmacy employee whose murder would eventually lead detectives to search Gacy’s home and find items from his victims. They later discovered bodies in the crawl space, on other parts of the property, and in the Des Plaines River.

Gacy was convicted of 33 murders (only 22 were identified) and sentenced to death in 1980. While imprisoned, he began to paint; many were pictures of clowns, and he sold them from prison. Gacy remained a terrible person until the end, never showing remorse for his crimes, and saying “Kiss my ass” as his final statement. He was executed in 1994 by lethal injection.

Gacy’s Last Meal: a dozen deep-fried shrimp, a bucket of KFC’s original recipe chicken, French fries, a pound of strawberries, and a bottle of diet Coke.

John Wayne Gacy managed a total of three KFC restaurants in Waterloo, and no doubt became very familiar with their secret recipe. If only a fried chicken recipe had been the only secret he’d been keeping.

1. Remove the chicken from the fridge. Season with salt and pepper on all sides. Allow to sit at room temperature for about 20 minutes. The chicken will not be as cold, and will not lower the oil temperature as greatly.

3. Set up an assembly line starting with the wet mixture, the dry mixture, and a clean plate at the end.

4. Pour the oil into a large cast-iron skillet so it comes about 1 inch up the side. Heat over medium-high until an instant-read thermometer registers 350°F.

5. With your left hand, dip a piece of chicken into the egg mixture. Transfer to your right hand and dip it in the flour. Evenly coat the chicken by pressing the flour into it. Place the chicken on the clean plate. Repeat with the remaining chicken pieces. Keeping one hand dry will be helpful to reduce sticking, and make the breading process more efficient.

6. Fry the chicken a few pieces at a time until golden brown and a thermometer inserted into chicken reads 165°F, about 7 to 8 minutes on each side. Drain on paper towel–lined plates.

From last meals the size of a diner menu (including dessert and beverages), to a single unpitted olive, The Serial Killer Cookbook shares every tasty and downright weird last meal a true crime junkie needs to know—and eat!

So if you need some inspiration for your next murder mystery dinner party, or want to make some appetizers for a scary movie night, this cookbook is for you.

Order The Serial Killer Cookbook now and dive into a brand-new way to explore the fascinating world of serial killers.

Are you up on your serial killer trivia?

Bring your love of true crime into the kitchen with meals ranging from the bizarre (a single unpitted black olive) to the gluttonous (a dozen deep-fried shrimp, a bucket of fried chicken, French fries, and a pound of strawberries), inspired by Ted Bundy, John Wayne Gacy, and other notorious death row inmates. The perfect gift for murderinos 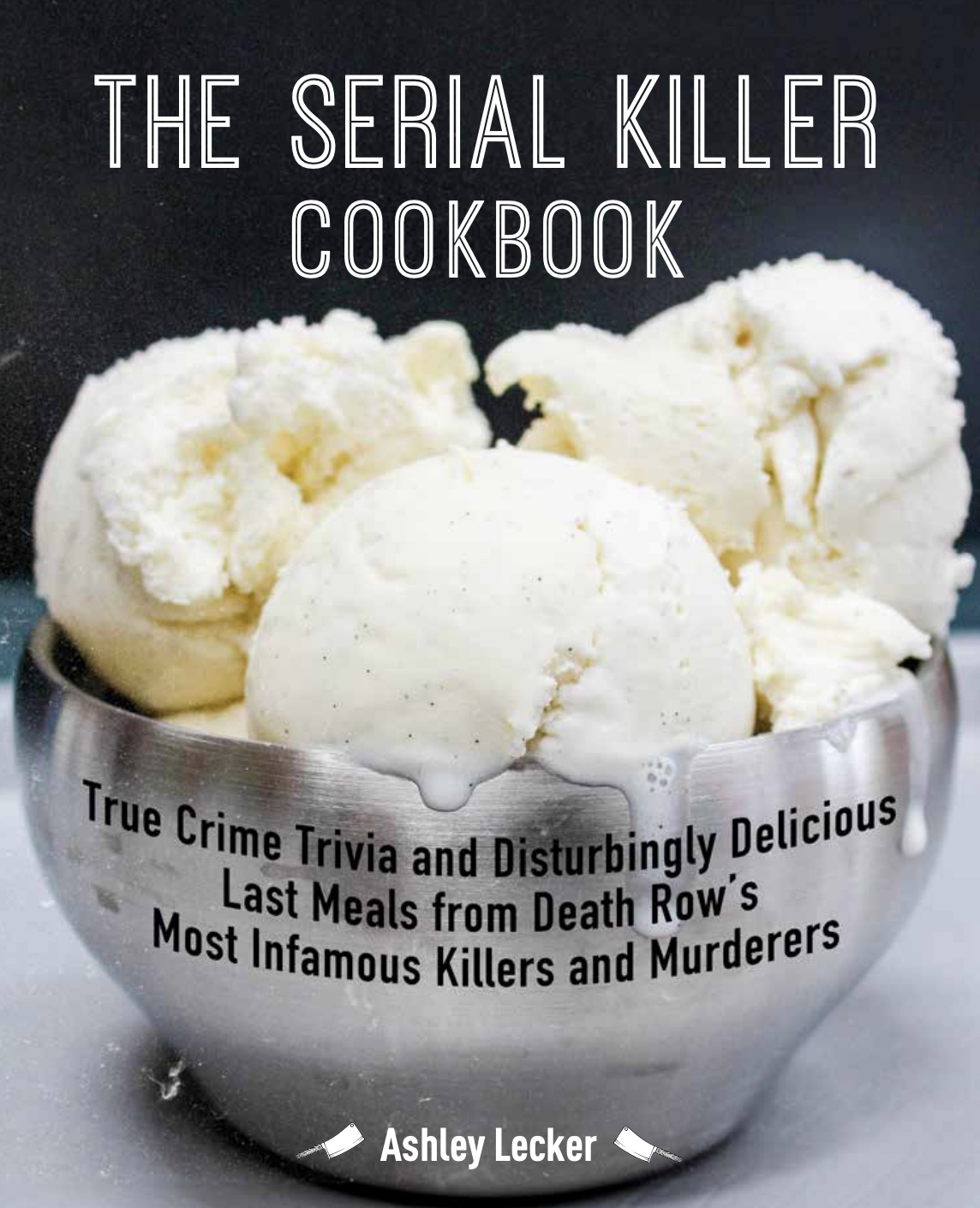 What are your Interests? 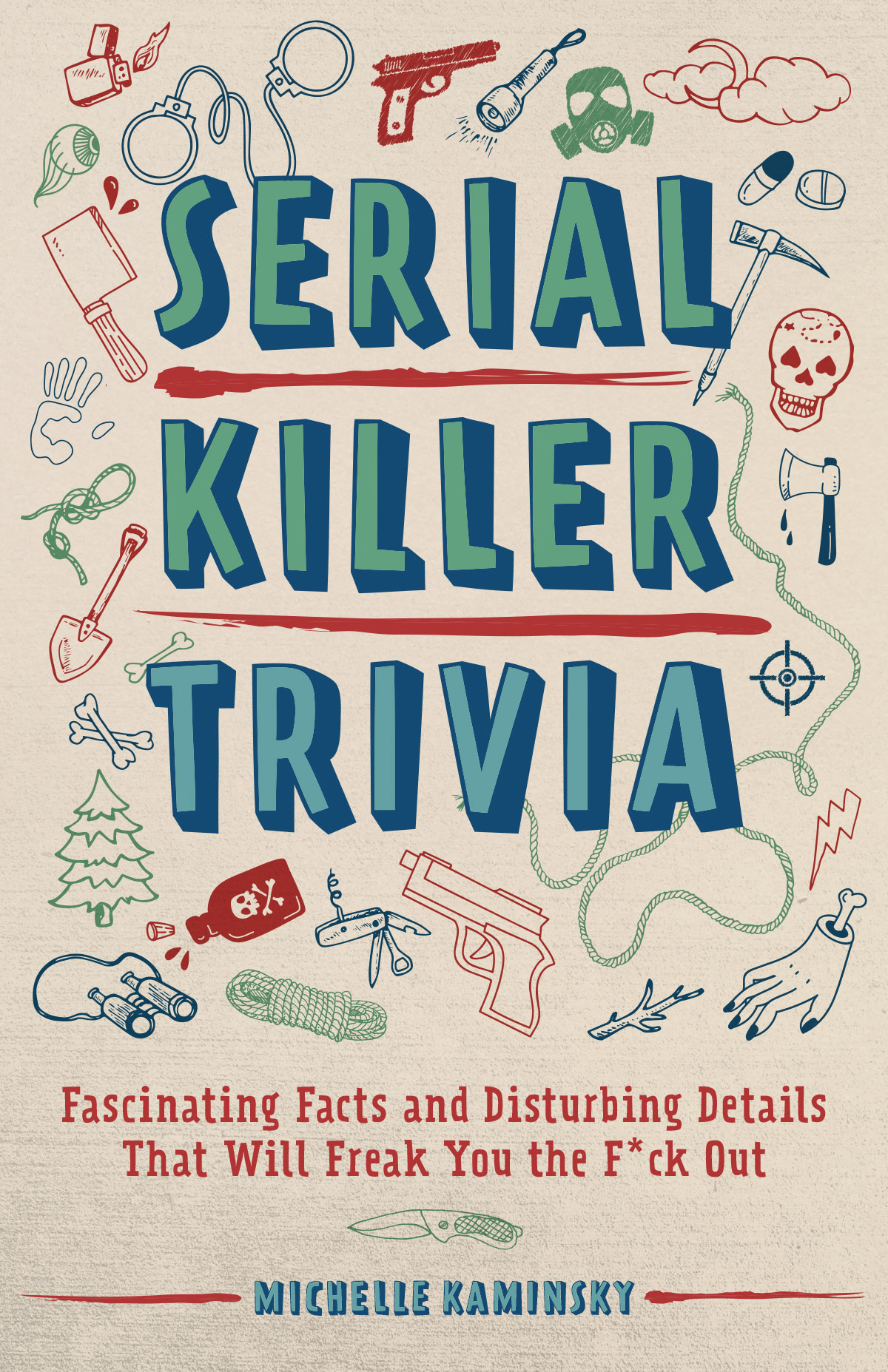 The Ultimate Collection of Serial Killer Trivia for True Crime Fanatics This bloody and ... 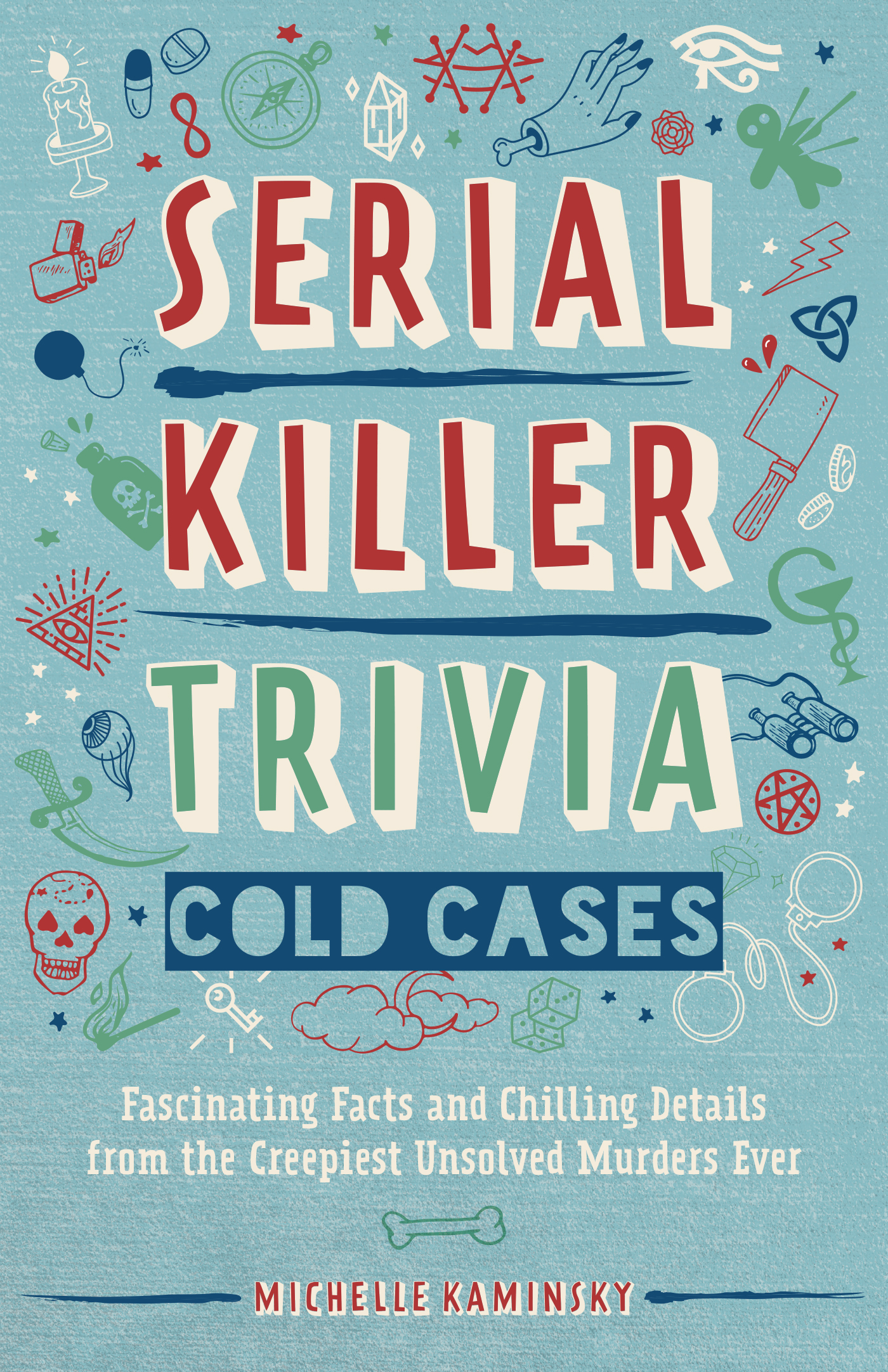 The ultimate collection of fascinating facts, stories, and trivia from the most infamous cold cases ... 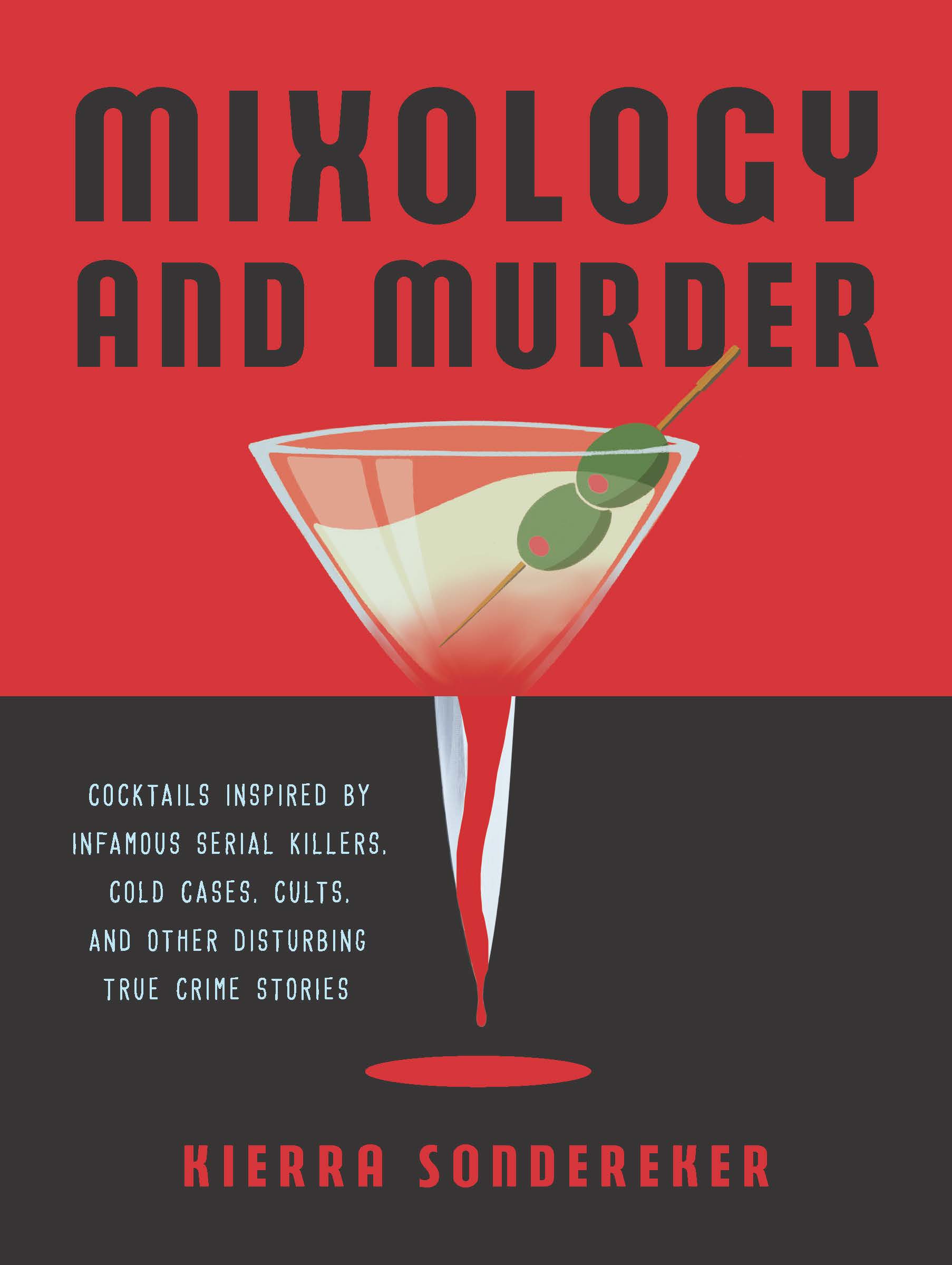 Pour yourself a drink and discover your latest true crime obsession with this cocktail book that ...

The Ultimate Collection of Serial Killer Trivia for True Crime Fanatics This bloody and ...

The ultimate collection of fascinating facts, stories, and trivia from the most infamous cold cases ...

Pour yourself a drink and discover your latest true crime obsession with this cocktail book that ...