The post below is excerpted from The Reality Shifting Handbook by Mari Sei, available today!

When we think of shifting, it sort of seems like some far-fetched, sci-fi happening that feels like a completely foreign and fictional experience. I can assure you that it’s not like that at all. However, despite shifting being a natural process that we’ve been experiencing throughout our entire lives when we make tiny movements and decisions, making a larger shift consciously does entail a few feelings and experiences we wouldn’t get with mini-shifts. Additionally, it raises quite a few questions, which are about to be addressed in this chapter.

1. WILL THE REALITY FEEL AS REAL AS THIS ONE?

This is one of the first things I’d love to address, as it’s a question almost every new shifter has at the beginning of their journey. The reality you’re planning to shift to will be exactly like this one, only with the changes you’re making. By that, I mean that it’ll feel the same. Take your hand and touch the thing closest to you. Perhaps it’s your bed or your phone. Touch it and really take in how it feels. Next, what can you smell? Maybe you can smell something cooking, or the smell of your freshly washed clothes. Maybe go and grab a drink or something to eat. You taste it, right? When you shift, none of this will change. Your senses will be exactly the same as this reality, and it will be just as real as this one. I’ve said this before, but we’ve been shifting since birth. We were simply unable to detect these shifts due to their minuscule and unconscious nature. These realities have always felt the same, right? They’ve always felt just as real, so why would that be different this time?

2. EVEN FICTIONAL REALITIES (SUCH AS FROM SHOWS, BOOKS, ETC.)?

A lot of realities taken from pieces of media are often called “fictional” realities, but these are actually not at all fictional. Are they fictional in this reality? Of course! However, if we’re shifting to a reality where these people and things exist, they are no longer fictional and are instead real. Here’s a good example: let’s say you’re shifting to meet your favorite character from your favorite movie. They don’t exist here in your current reality as that character, but they do in another reality—in their reality where they are no longer from a piece of media.

The answer to this question truly varies from person to person, and the way in which you shift can also have an impact on how it feels to shift. Different methods can give different outcomes, such as shifting while you’re awake or asleep. Being asleep would mean you’re likely unaware that you’re shifting, and therefore you wouldn’t feel or experience anything until you open your eyes and find yourself in your desired reality. If you’re going to shift while you’re awake through something like meditation, visualizations, or a method, you will be consciously aware of this shift.

The first thing I want to assure you of is that you won’t feel any sort of pain or major discomfort. Apart from this, what the experience is like does vary from person to person. A lot of people report that they hear or feel things from their desired reality, or even see bright flashing lights while their eyes are closed, which I personally have experienced.

When I was shifting using my own shifting method, I was still as a statue, lying in bed. I felt that my arm was in a weird position, definitely not how I was actually lying. My arm was still in the same place physically, and I knew that, but it oddly felt sort of twisted. This wasn’t a weird or scary feeling, and I continued my method until I suddenly began seeing colors spreading across my eyelids. I followed these colors until my body felt like it was spinning. Once again, I wasn’t actually spinning—I was merely feeling a bit lightheaded as I was shifting— but it was a weird and new sensation to me. Last, I saw a bright, white light take over my vision. This bright light was unmissable, and actually gave me a lot of confidence in how real the shifting process actually is.

Those are some of the feelings I experienced, and a lot of shifters have similar ones. To further add to the sensations, people may also feel floaty, lightheaded, and could even feel their heart racing as they’re shifting. This is absolutely nothing to worry about. Some people also shift with none of these feelings at all. Quite a few people have randomly woken up in their desired reality after just sleeping normally, so don’t develop the negative mindset that you must feel these things in order to shift.

4. WILL EVERYTHING BE EXACTLY HOW I WANT IT?

Yes! When we script (which we’ll go into more detail about later), or plan out our desired reality, our subconscious remembers every little detail. From things of major importance, such as your family or work life, to tiny things like smaller habits or your favorite TV show, nothing will be left out. You can trust yourself and your subconscious with the details.

This part comes down to you and how you want to be made aware. Quite a few people script something that indicates they’re in their desired reality, some examples being a specific smell or somebody waking them up. Some people even script that they immediately open their eyes after shifting, so as long as you have an intention to be made aware, there’s no need to worry about knowing you’re actually there.

If you haven’t scripted any specifics, you can usually tell you’ve shifted through a change in atmosphere. Many shifters state that the atmosphere changes around them, and they know they’re there. It’s hard to picture this until you feel it personally, but if you feel like the atmosphere has changed or you’ve shifted, you probably have. The way the atmosphere changes will be different depending on what you’ve scripted. For example, your desired bedroom may be a little colder than your bedroom in this reality, or you may have scripted that you’re waking up next to someone. If you feel this weight on your bed as planned, or perhaps feel a drop in temperature or notice a subtle noise you weren’t aware of before, this is the change you’re looking for.

6. DO I HAVE TO LIVE INMY DESIRED REALITY FOREVER?

You can shift back to this reality whenever you want. We all have different reasons to shift; therefore, some people decide to stay in that reality for the rest of their lives. There’s absolutely nothing harmful about this! Staying in the new reality permanently simply means that you don’t have to shift back to this reality, and your consciousness will remain in your desired reality until (if ever) you decide to shift elsewhere. Still, if you don’t want to stay there permanently, you won’t. You can shift back in the same way you shifted there, or you can script a safe word or action to bring you back immediately on demand. For example, if you scripted that saying the word cherry three times in a row automatically shifts you back to this reality, it will!

7. WILL I DISAPPEAR FROM THIS REALITY WHEN I SHIFT?

Nobody will know you’ve shifted unless you want them to, and you certainly won’t disappear. Your body here will continue as normal as there’s still going to be a consciousness inhabiting it. When you’ve minishifted in the past, the person you were from previous realities hadn’t disappeared. When you choose the strawberry milkshake over the water, and you shift to the reality where we have the strawberry milkshake, the you from the reality where you were undecided is still there, it’s just that it’s no longer your consciousness, but another, almost identical one.

8. BUT WON’T I FEEL OUT OF PLACE IN MY DESIRED REALITY?

Unless you decide to script otherwise, you’ll have all the memories, experiences, and familiarity you’ll need in order to feel comfortable when you shift. You don’t even have to remember that you’ve shifted, and you could wake up as if you’ve been there your entire life.

Master the popular internet sensation of reality shifting with this step-by-step manual packed with everything you need to know to get started on journeying to your desired reality. You’ve probably heard about reality shifting on TikTok or Facebook, but what is it really and how can you try it? The Reality Shifting Handbook will 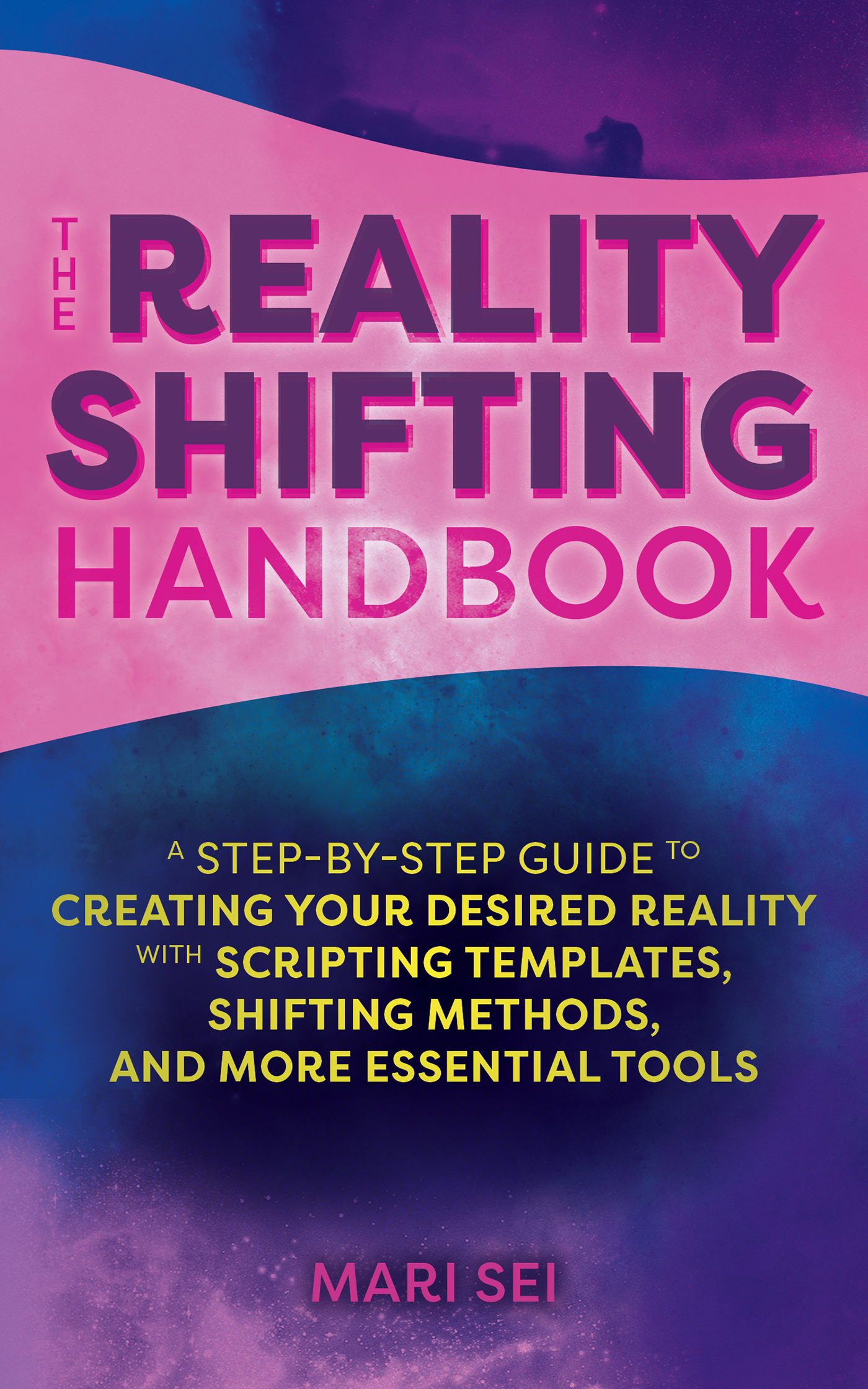 Dive into the world of green witchery and uncover the destiny at the bottom of your tea cup with ... Protect yourself against negative energy, soothe anxious thoughts, and empower your inner empath ... Let the Divine Feminine guide your tarot practice with this beautifully illustrated deck and ...

Dive into the world of green witchery and uncover the destiny at the bottom of your tea cup with ...

Protect yourself against negative energy, soothe anxious thoughts, and empower your inner empath ...

Let the Divine Feminine guide your tarot practice with this beautifully illustrated deck and ...